Showing posts from January, 2018
Show all

Gina On An Elephant 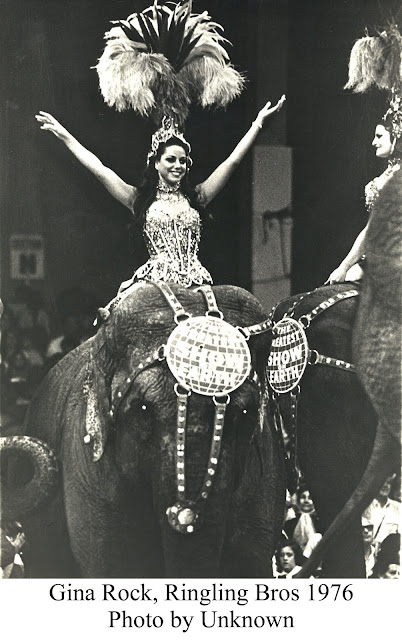 Ringling Brothers Tribute - Published on January 16, 2017
Thank you to the Feld Family for a wonderful experience
This piece comes from a performer who shared two years with the famous Circus, Ringling Bros. I first would like to state for the record that I was proud to be part of this wonderful Circus History of Ringling Bros. and give a heartfelt thank you to the Feld family for making this 146-year piece of history to be so magical for both the performers as well as their audiences across the U. S. As a kid growing up in the 60’s, it was a time when this type of live show that included the animal acts was accepted.
Although I do not believe that animals should be locked up in small cages, especially large lions, tigers, and bears, it is important that the truth be told from those that lived behind the scenes of the Red or Blue curtain about the way these animals were handled. I believe that nature does not dictate for man to control large wild animals, but many were raised since bir…
Post a Comment
Read more

Thank You To Joshua Shaffer 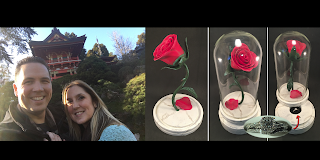 In 2015, when I was struggling through my first year at USC, and one of the very few times I was off a disaster deployment, I ran across a blog written by Joshua Shaffer about the flying Tinker Bells in Disneyland. I emailed him because I had been trying to contact some Disney writers and thank them for all the wonderful articles they wrote about when I was the Flying Tinker Bell. Joshua asked if he could interview me regarding my past experiences as Tink for an article in the Disneyana Newsletter and I was honored to do this. I found the interview process to be a refreshing change from college, and doing what I love most; helping those in need.
We had a great chat about all the wonderful experiences he shared with many show folks like me that had interesting stories about working at the park, and soon became fast friends.
Joshua was so enthusiastic about his writing and passion for Disney trivia, I could not wait to read his first book. I am not sure I ever really realized how many l…
Post a Comment
Read more

Gina With The Flying Ramos 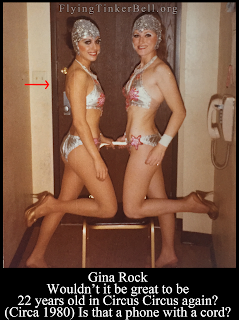 Here is Gina Rock only 3 years before becoming Tinker Bell. Across from her is Mitzi Ramos of the Flying Ramos.
Wouldn’t it be great to be 22 years old in Circus Circus again?
(Circa 1980 or late 1970′s, Las Vegas)  Is that a phone with a cord? To learn more about Gina Rock and her time before and after her life as Tinker Bell, visit her website HERE.
Post a Comment
Read more